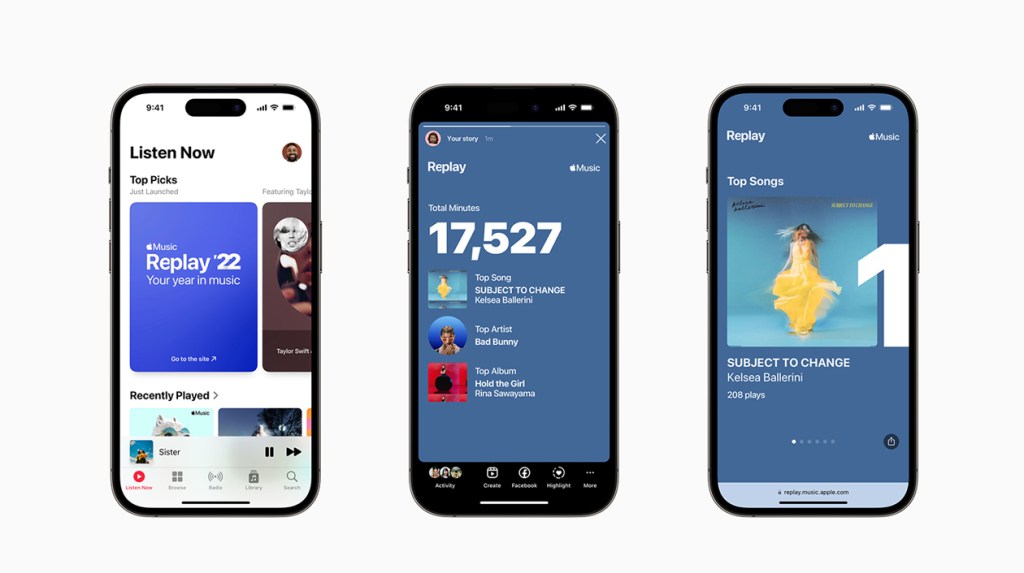 Apple Music has released its revamped listening roundup, called Replay, which allows users to access a highlight reel of insights into their listening habits for 2022. This includes their total listening time, as well as their top songs, artists, albums, genres, playlists (both editorial and personal) and radio stations.

Released Tuesday (Nov. 29), Replay is rolling out with an updated color design and shareable assets for the top five of each user’s categories and will include a playlist of each user’s 100 most-played songs of the year. The most dedicated fans will also be clued in if they’re among the top 100 listeners for an individual artist or genre. Despite the fact that it rolls out before December hits, each user’s Replay will continue updating throughout the end of the year.

Among the Top 100 Songs, hip-hop still leads the way with 32 entries, though that’s down considerably from the 45 it had on that chart last year; with Apple surpassing 100 million tracks on its platform earlier this year, there is a more even distribution among genres than in years past. Pop came in second with 23 songs on the list, followed by R&B/Soul with 11, Latin with eight and J-Pop with six. Meanwhile, the top 10 Shazams list includes a number of African artists for the first time, including Rema (“Calm Down”) and Ckay (“Love Nwantiti”) in the top 10, while the lyrics chart includes four J-Pop songs. Perhaps predictably, the fitness songs chart was dominated by dance releases and remixes.

Earlier this month, Apple announced that Bad Bunny was its artist of the year, with his Un Verano Sin Ti the most-streamed album on its platform in 2022 and the most-streamed Latin album of all time. His ascension to that spot highlights the growing trend of non-English-language songs succeeding on the platform: overall, 21 non-English songs landed on the year-end Global Top 100, up from just nine last year.